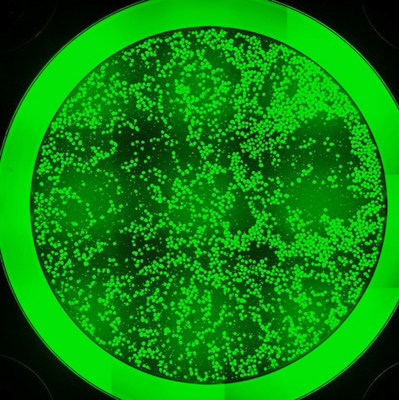 A team led by the Cincinnati Children’s Center for Stem Cell and Organoid Medicine (CuSTOM) and Yokohama City University in Japan report their findings Dec. 5 in Cell Reports. The study’s lead investigator is Takanori Takebe, MD, a physician/investigator at both institutions.

The current study overcomes what have been nagging challenges for researchers working to bioengineer human organs that are safe and effective for therapeutic use, according to Takebe.

The new process allows researchers to bioengineer single batches of up to 20,000 genetically matched, three-dimensional and highly functional liver micro-buds. When combined, the batch has a sufficient quantity of liver cells and size feasibility for transplant into a person with liver failure, or for drug testing. The liver tissues were also generated entirely from human induced pluripotent stem cells (iPSCs), making the process free of animal feeder byproducts used to make cells for research purposes – a barrier to the cells being used therapeutically.

«Because we can now overcome these obstacles to generate highly functional, three-dimensional liver buds, our production process comes very close to complying with clinical-grade standards,» explains Takebe. «The ability to do this will eventually allow us to help many people with final-stage liver disease. We want to save the lives of children who need liver transplants by overcoming the shortage of donor livers available for this.»

The researchers stress continued research and refinement of their process is required before initial clinical trials could begin. Takebe estimates this might occur in the next two to five years.

The work includes an international team of scientific and industrial collaborators, mostly in Japan and in Cincinnati. Takebe and colleagues over the past five years published several studies that made continuous progress into defining the precise genetic and molecular blueprints needed to mimic natural human development. This allows the researchers to develop and bioengineer functional, three-dimensional human mini livers in the laboratory.

To help overcome the biological challenge of animal-product feeder cells in the current study, Takebe and team used their fine-tuned formula of genetic and molecular components to generate the liver tissues in custom-designed, U-shaped bottom micro-well cell plates. The plates use a combination of chemistry techniques to form a finely structured film inside the micro-wells, designed to nurture the developing liver buds.

But prior to this step, the researchers started mass production by initially using the donor-derived iPSCs to grow three critical types of liver progenitor cells needed to generate healthy livers. These include hepatic endoderm cells and both endothelial and septum mesenchyme cells. Study data show this generates robust and highly functional progenitor cells that are placed into the custom-designed, film-coated micro-wells. The progenitor cells then engage in high levels of molecular cross-communication to form into self-organizing, three-dimensional liver buds.

The authors write that after they generated over 20,000 (liver) micro spots per well capable of reaching a scalable, therapeutically viable level, they tested the functionality of the three-dimensional tissues in genetically programmed mouse models of liver disease. The animals were rescued from liver disease by the highly functional organs.

Among the many key collaborators on the study is co-author Hideki Taniguchi, MD, PhD, professor, Department of Regenerative Medicine at Yokohama City University.

Designed and manufacture of the Elplasia custom micro well plate involved a collaboration with Kuraray Co., Ltd., in Japan.

Funding support for the research and development came in part from the Research Center Network Grant for Realization of Regenerative Medicine (Japan Agency for Medical Research and Development), PRESTO (Japan Science and Technology Agency), Grantsin-Aid from the Ministry of Education, Culture, Sports, Science and Technology of Japan (24106510, 24689052, 21249071 and 25253079), from the Specified Research Grant of the Takeda Science Foundation and from the Japan IDDM network. Takebe is a New York Stem Cell Foundation – Robertson Investigator.

Takebe and Taniguchi have served on scientific advisory boards for Healios Inc., in Japan, a collaborator on the current study.