AKRON, Ohio, July 21, 2021 /PRNewswire/ -- On June 28, 2021, the U.S. Supreme Court ruled against the City and County of San Francisco in a landmark case, Pakdel v. City & Cty. of San Francisco, protecting the property rights of citizens across the country. 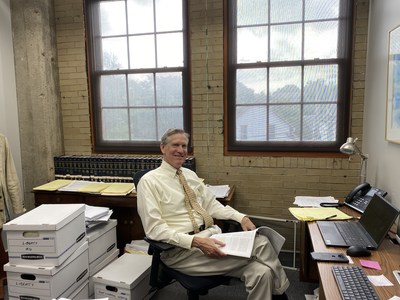 The Pakdels planned to retire to San Francisco and bought an interest in a six-unit building. The building owners agreed to convert the building into a condominium so that each owner could control their own property. However, San Francisco unexpectedly amended its condominium-conversion ordinance requiring owners of any would-be condominium to grant lifetime leases to non-owning residents. This ordinance could have prevented the Pakdels from ever moving into their future retirement home because the tenant that lived there could choose to stay over the owner's objection.

In June 2017, Thomas Connors, of the Mendenhall Law Group, filed a federal suit for the Pakdels in the Northern District of California. Among other claims, the lawsuit alleged violations of federal law 42 U.S.C. § 1983 which creates a right of action for a government's violation of a citizen's constitutional rights. Here, the lawsuit alleged that, by requiring an owner to grant a lifetime lease to a tenant, San Francisco had conducted an unconstitutional taking without compensation and/or seizure of private property.

On November 20, 2017, the United States District Court for the Northern District of California dismissed the Pakdels' lawsuit because holding that Pakdel had failed to follow the proper California state administrative process to appeal the new San Francisco ordinance. The California administrative process requires plaintiffs such as the Pakdels to litigate in California state court where plaintiffs generally reach a dead end with no ability to litigate their constitutional claims in federal court.

Pakdel appealed the decision to The United States Court of Appeals for the Ninth Circuit which hears appeals from federal cases arising from California and other states. On March 18, 2020, the Ninth Circuit upheld the dismissal of the Pakdels' claims. The Pakdels continued their fight on appeal to the U.S. Supreme Court.

Finally, on June 29, 2021, in a unanimous decision, the U.S. Supreme Court overruled the lower court's decisions to deny the Pakdels' constitutional property rights. Citing Knick, a Supreme Court decision from 2019, the Supreme Court stated that "Whatever policy virtues [state administrative processes] might have, administrative "exhaustion of state remedies" is not a prerequisite for a takings claim when the government has reached a conclusive position." The Court reasoned that because San Francisco denied a request for an exemption to the ordinance and also denied a request for compensation for the taking, the city reached a conclusive position.

"The Pakdel decision makes federal court more accessible for private citizens to defend their constitutional property rights from infringement by local, state, and federal governments. I'm very grateful to the Pakdels for fighting through this important case." said Attorney Thomas Connors. "The case is not only a huge win for them, but also a win for people across the country concerned about government overreach."

The lawsuit is captioned Pakdel v. City & Cty. of San Francisco, California (N.D. Cal.). A copy of the U.S. Supreme Court decision can be found at warnermendenhall.com.