TORRANCE, Calif. and RAYMOND, Ohio, Oct. 9, 2019 /PRNewswire/ — A group of Honda engineers will pursue their outdoor passions and take the company’s product development efforts to the next level as they tackle the 2019 Rebelle Rally, an all-women off-road navigation event in the United States. Starting October 10, two driver/navigator teams of engineers from Honda R&D Americas, Inc. (HRA) in California and Ohio will compete in the Rebelle Rally, the second straight year Honda has participated. 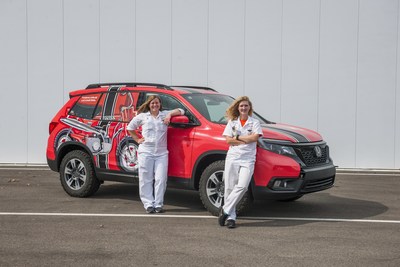 Kicking off on October 10 at Lake Tahoe, the Rebelle Rally covers eight days of competition that traverses the western portion of Nevada, crossing into Southern California to finish at the Imperial Sand Dunes. It’s not a race for speed, but a unique and demanding event where the teams strategically navigate from checkpoint to checkpoint – within set windows of time – using only maps, compasses, and a roadbook.

Team Challenging Spirit (#203) to Drive the 2018 Honda Ridgeline
Team Challenging Spirit #203 features Sharon Moore, HRA senior engineering technician based in Torrance, California, and Michelle Klein, HRA crash safety test engineer based in Raymond, Ohio, who will return for her second Rebelle Rally to navigate the 2018 Ridgeline. Moore’s role at HRA is to create full-scale models of future Honda and Acura vehicles, helping designers and engineers realize their ideas in three dimensions. Past projects have included the first-generation Honda Ridgeline, first-generation Honda Element, and the Acura CLX concept car (1995), as well as contributing to the Honda GRX (2006) and Acura Bike Tour Trike (Velomobile) concepts.

Klein is the only returning Rebelle Rally competitor from 2018, and has been a mentor for her teammates. As part of the safety engineering team at Honda R&D Americas, she conducts whiplash testing to study and improve the safety of Honda and Acura products. Klein has worked on safety testing for many vehicles, including the 2016 Honda Pilot, 2016 Honda Civic, 2016 Honda Odyssey, 2016 Honda Ridgeline, and the 2019 Acura RDX.

«I want every woman to experience this type of life-changing event of facing their own inner fears of failure with bravery, endurance and determination,» said Klein. «Last year’s Rebelle Rally was a transformational experience for me and I am grateful for the opportunity to mentor and help new drivers cross the finish line.»

Team Sand Mode (#208) to Navigate the 2019 Honda Passport
Team Sand Mode #208 features Liz Casteel, HRA chassis reliability test engineer based in Raymond, Ohio, and Tasha Krug, HRA engine systems and drivability test engineer – also based in Raymond, Ohio – who will compete in the 2019 Passport. Casteel helps guarantee the reliability of Honda and Acura vehicles through subframe and suspension testing, which includes in-lab and on-car strength, durability, and marketability analyses. She has been a member of the 2017 Honda Ridgeline and 2019 Acura RDX development teams.

«I am excited for the Rebelle Rally and look forward to facing the challenges that it will throw at us,» said Casteel. «It is a unique event that will bring our Honda team even closer through the adversities we will overcome.»

In her role at Honda R&D Americas, Krug calibrates engines and automatic idle-stop systems, which can enhance fuel efficiency and reduce emissions in city driving. She has tested on-board diagnostics failsafe systems and was on the 2019 Acura RDX development team.

Design Inspiration for Honda Vehicle Wraps
The Rebelle Rally wrap for the 2018 Ridgeline was designed by Honda exterior designer Lili Melikian and celebrates Honda’s performance development heritage. The Ridgeline’s wrap is a simple expression of performance and dynamic motion, with the intent to make it look sporty, energetic, and eye-catching. The side of the Ridgeline features a «Triangulation» pattern, which was inspired by the navigation method drivers use to pinpoint their location in the wild. This involves mapping three nearby landmarks to determine where you are. Honda Rebelle Rally team members and supporters in Ohio and California also are represented in the wrap design.

The Rebelle Rally wrap for the 2019 Passport pays homage to Honda’s off-road heritage and offering accessibility to off-road adventures – much like the Rebelle Rally – by featuring an illustration of Honda’s iconic Mini Trail 70 on the 50th anniversary of its introduction.

Proving Ground for 2019 Honda Passport and 2018 Ridgeline
The Rebelle Rally provides a unique opportunity for Honda engineers to test the 2019 Passport and 2018 Ridgeline in the type of environments they’re designed to be driven in. Both vehicles are only lightly modified from stock. These modifications are mainly custom front and rear skid plates, more all-terrain off-road tires, auxiliary lights, roof rails, and an in-cabin tire rack.

The 2019 Passport is the newest addition to Honda’s award-winning SUV lineup and delivers a unique combination of on-road driving refinement and off-road capability along with best-in-class interior space. The 2018 Ridgeline pickup truck won North American Truck of the Year for this generation’s first year in 2017, and is the only unibody midsize pickup available in the U.S. Both vehicles feature Honda’s highly advanced Intelligent Variable Torque Management™ (i-VTM4™) torque-vectoring all-wheel drive system that includes Intelligent Traction Management (ITM) modes of Normal, Snow, Mud and Sand that allows the driver to select the best all-wheel drive parameters for the environment.

To follow Honda’s teams during the Rebelle Rally, visit https://www.rebellerally.com/. Additional photos and video are available to media upon request.

About Honda
Honda offers a full line of reliable, fuel-efficient and fun-to-drive vehicles with advanced safety technologies sold through over 1,000 independent U.S. Honda dealers. The Honda lineup includes the Fit, Civic, Insight, Accord and Clarity series passenger cars, along with the HR-V, CR-V, Passport and Pilot sport utility vehicles, the Ridgeline pickup and the Odyssey minivan.

Honda has been producing automobiles in America for more than 35 years and currently operates 19 major manufacturing facilities in North America. In 2018, more than 90 percent of all Honda brand vehicles sold in the U.S. were made in North America, using domestic and globally sourced parts.

About Honda R&D
Operating 14 facilities in the United States, Honda R&D Americas, Inc. (HRA) was incorporated in 1984 after beginning operations in California in 1975. HRA is responsible for creating advanced products and technologies that provide new value to Honda and Acura customers. HRA conducts all phases of product development in the U.S., from market and technology research and styling through engineering design to prototype fabrication and testing, local parts procurement and support for mass production preparation.

With major facilities in California, Ohio, North Carolina and Florida, HRA is engaged in the development of Honda and Acura automobiles and Honda powersports and power equipment products. HRA is also playing a lead role in the development of leading-edge safety, driver assistive and environmental technologies. Learn more at http://www.hondaresearch.com/.