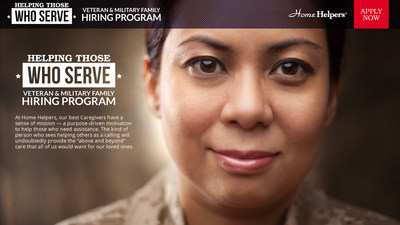 MSEP was created by DoD in 2011 in response to a growing readiness issue. Military spouses have a 26 percent unemployment rate and a 25 percent wage gap compared to their civilian counterparts, according to the Partnership. The inability of spouses to obtain and retain fulfilling employment as they relocate compromises the quality of life of many military families.

«We’re honored to have been approved for MSEP membership,» said Home Helpers Home Care CEO Emma Dickison. «We know that the commitment to service and understanding of duty already make veterans and military family members among our most reliable Caregivers and some of our most successful owners. We’re very proud to continue our effort and tradition of working with the military and veteran communities.»

With locally-owned offices serving more than 900 communities nationwide, Home Helpers Home Care is uniquely positioned to offer military spouses transferrable skills in Caregiving, service planning, coordination, supervising and administrative roles. The company hopes that many of these military families will want to become Home Helpers Home Care franchisees themselves when they near separation from the Armed Forces. Home Helpers has committed to adding thousands of veterans and military family members across the network.

More information is available at myseco.militaryonesource.mil/portal/msep/jobsearch  for families interested in career opportunities.

Since 1997, Home Helpers® Home Care has provided exceptional in-home care to seniors and others. With independently owned and operated offices in more than 900 communities across the United States, we are committed to supporting the dignity and independence of the families we serve. Learn more at HomeHelpersHomeCare.com. For franchising information, visit HomeHelpersFranchise.com.